Guy Bourdin: Image Maker sheds new light on the infamous French fashion photographer Guy Bourdin. The protégé of Man Ray, Bourdin was deeply inspired by surrealism. He transformed photography in the 1970s and gained significant notoriety for his work with fashion magazine Vogue.

This exhibition invites the viewer to appreciate the artist’s process: to see original film footage, sketches, unpublished photographs and polaroids; the hidden Bourdin is revealed while the viewer is taken on a trip through his filmic, sexy, wild and powerfully suggestive images. 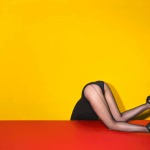 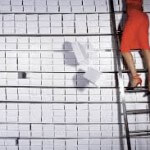 The exhibition begins in Britain, tracing the famous trip Bourdin took with his family across the country in a black Cadillac with a pair of mannequin legs and a suitcase full of shoes. Here he places the mannequin legs against the backdrops of Britain: train station, bus stops, fields, poolsides, crossing a cobblestone street, awaiting a black cab. These photographs in particular ignite the imagination, teetering off balance, suggesting movement. Bourdin invites the viewer to conjure a narrative around the image – and so, we are all the image-makers and photographers in his world.

Several rooms reveal unpublished photographs, alongside famous Vogue spreads and a film is projected on a Super 8 camera giving the viewer some insight into his process

Bourdin always searched for a location upon which to place his models, enhancing his worlds through various techniques to create filmic worlds that are imbued with narrative; models are hidden, only legs or lips or hands revealed.

Coleen is a Canadian writer and theatre director with a thirst to explore the world. She trained at École Internationale de Théâtre Jacques Lecoq in Paris, where she mentored with French playwright, Michel Azama. She is currently developing a new play through the Arcola Theatre Writers’ Programme.