Sebastiao Salgado gained notoriety in the 1980s, when he photographed the famine and its effects in the Sahel region of Africa.  Since then, he has continuously documented the most uncomfortable  aspects of our contemporary world – human pain resulting from exploitation, terror of wars, and ecological destruction.  Salgado’s photos, although records of specific events in time and places, have the power to transcend this specificity and even point to universality.  It could be argued that human pain does not have nationality, ethnicity or country.  It is something that we can all feel and share. Susan Sontag, in her short essay titled “Photography: A Little Suma”, tells us that “in a modern society, images made by cameras are the principal access to realities of which we have no direct experience” and Salgado’s photos are powerful enough to take viewers to remote places but also close a gap of indifference.

However, Salgado has been criticized because of his lush, aesthetic style, which conflicts with the subject matter. While recording tragic and painful events, he has also created works of art narrowly defined as the incarnation of the idea of beauty, or the antithesis of ugliness.  The most prominent critic in this regard was Ingrid Sichy who, in an article titled “Good Intentions” in the New Yorker magazine, claimed, “beautifying human tragedy results in pictures that ultimately reinforce our passivity towards the experience they reveal”.  In other words, the sheer beauty of one’s photographs can weaken their message.  Even those who generally appreciate the body of Salgado’s works sometime find his photos too aesthetically beautiful.  According to J. Stathatos, for example, Salgado’s photos are both brilliant in execution and absolutely harrowing in content. But there is a problem.  Their sheer beauty does not allow us to read the images in any way other than through a veil of aesthetisised exoticism. To this accusation, Salgado himself responded: “the beauty of the photographs lends dignity to the people in them”. If the photos are indeed viewed through a “veil of aesthetisised exoticism”, why is it thought that their message is weakened?  If Salgado’s photos were made in a less artistic way, that is, in a more conventional style of documentary photography, would they convey more serious messages on human pain, misery and madness more effectively?  To put it differently, is the relation between human pain and aesthetic beauty that of mutual exclusivity?

Salgado claims that he never stages his photographs, however, the extreme formalism of some of his photos may lead people to believe otherwise, and open the work up to moral critique. However, it can be argued that this formalism may well be the very element that renders his photographic images successful.  For example, in his photo that depicts a parallel image of a dead tree and a starving child next to it (Untitled, Mali, 1985/87),  the child is obviously underweight and underfed.  On the left side, towards the back, there is a tree that has little sign of life, and towards the front, a child is standing.  In contrast to the tree, the child is alive, still standing on his own feet, and somehow shows the sign of life and perhaps hope for survival.  However, his skeletal body hopelessly resembles that of the tree and our moral conscience will be stirred by this parallelism that indicates the stark probability that the child may never overcome the cruel fate. This blatant parallel, though effective in showing the tragedy of nature, may also be read as insensitive to the subject.

But even if some of his pictures are indeed staged, does it mean that these images never really existed unless they were artificially composed?  They did.  The child and the tree were always there, and they always will be.  Thanks to the aesthetic formalism that yields powerful storytelling power through parallel images, the photo transcends the specific time and space and renders possible the incarnation of timelessness of human suffering through different experiences.  The fact that this photo or other photos might have been staged does not annul the cruel reality and the real problem that exist, and Salgado is only trying to pass a timeless message that can be received with as much sympathy and emotion as possible.

To compare Salgado’s photos with other forms of art when discussing the relation between human suffering and its aesthetic formalization, we can look at Paul Gauguin, who was inspired by the image of Peruvian (Inka).  Gauguin used this image and the form repeatedly in his paintings, in order to symbolize our fear of death (Eve – Don’t Listen to the Liar, 1889; Where Do We Come From? What Are We? Where Are We Going, 1897).  In this way, the dead body that was mummified in a remote time and place was revived by the artist and was given a universal form that to symbolize our fear of death that any human beings experience.  One of Salgado’s photos exhibits amazing resemblance to these paintings of Gauguin.  In Gourma-Rharous, Mali, 1985, an old lady covers her head with both hands, and her facial expression shows her immense sadness and hopelessness.  Although the picture was taken in Mali at a particular moment, the image is timeless because the whole gesture of the lady is so familiar to us, which somehow cancels the distance.  It is this power of the photo that derives from the aesthetic form itself that compels us. David Levi Strauss correctly evaluated Salgado’s work in this regard by quoting moral philosopher Emmanuel Levinas and saying that, through his photographs, Salgado aspires to that “transcendence of self, which calls for the epiphany of the Other”.

It can also be said that the tradition of Christian art has also made human suffering the primary source of its products.  Christ’s as well as others’ pain has been symbolized in various paintings and icons the images of which often take specific forms that are already so familiar to us.  It was this formal beautification of pain that helped Christianity to spread its message and continuously make people identify with its religious ideology.  It is through this formal beauty and symbolism in Salgado’s photographs that we not only catch a glimpse of a one-time event, but also experience certain timelessness that surrounds the images.  The range of photographs of the workers in the Brazilian Serra Pelada gold mine (1986), for instance, is not a series of temporary events.  The remarkable resemblance of these images to those of pyramid building adds depth For many critics, this still poses an ethical question: If suffering is portrayed as universal and aestheticized, does this de-humanize the subjects?

According to Salgado, his photos are “almost too beautiful” to be cynical about the reality that he sees through the lens.  He says:

“Compare me to the American photographer Walker Evans.  In the end, Evans has a kind of cynicism.  So they think that it must also be necessary for me to have a little bit of cynicism inside my pictures, no?  And this is a big problem in the society that we live in.  I work with many journalists and they are basically cynics.  It’s terrible this society that we are living in today.  If we eliminate a little bit of the huge pretentions that we have we can live in a better world”.

This statement reveals Salgado’s optimism.  He has seen and documented pain that covers our world, but he faces the world with conviction that it can be changed through human praxis.  Salgado of course has his own perspective to understand the world which he has developed since he was trained and worked as an economist.  In other words, he “photograph[s] with all … [his] ideology”.   But this ideology is characterized by a belief in positive human actions and the possibility to make a difference to the world, which is why Salgado is also committed to humanitarian work, and cooperation with prominent Non Governmental Organizations.

According to Vicky Goldberg, some of Salgado’s photographs can be credited with provoking powerful responses.  For example, his photographs of Cambodian amputees that appeared in The Independent in 1990, along with an appeal for money to manufacture artificial limbs in Cambodia, helped bring in contributions far beyond the amount of the appeal.  He also donated most of his profit from the Sahel picture to the French NGO  “Medecins Sans Frontiers”.

Salgado is also a photographer who affirms that it is not the photographer alone but other agents such as the media that have much influence in order to sensitize the society, to help or perhaps just simply to conduct propaganda.  Salgado himself hopes that his pictures can be used to provoke a debate.  His photographs, as a matter of course, have much power to “engage our attention, invite contemplation and nudge us to action”.  At the same time, he does understand that the pictures alone can do little to transform the reality, but “… these pictures together with humanitarian organizations, with the newspapers… all together can probably build a new society”.

In this way, Salgado not only photographs through his ideology, but also tries to ‘make it work’ through actions that are not confined to the sphere of pure imagery.  In other words, he would not hesitate to try to convince us, compel us to act, and push us to see and feel what he has created through his ideological standpoint.  His optimism allows him to overcome boundaries that often regulate our lives and narrow our mind: boundaries between beauty and ugliness, form and content, ideology and reality, art and media, us and them, self and other.  And herein lies his humanism that crosses our moral codes. 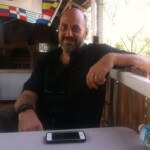 Nerris Markogiannis, originally from Greece,  obtained an MA degree in Photojournalism in London followed by an MA in the History of Photography from the University of St. Andrews.  He has been a photographer for the United Nations for many years and has completed missions in Kosovo, Darfur, and Haiti and is currently based in the Central African Republic. His work in Darfur was recently published by Dewi Lewis Publishing in the book Fragments of Darfur.

Susan Sontag, “At the Same Time, Essays and Speeches”, p.4.