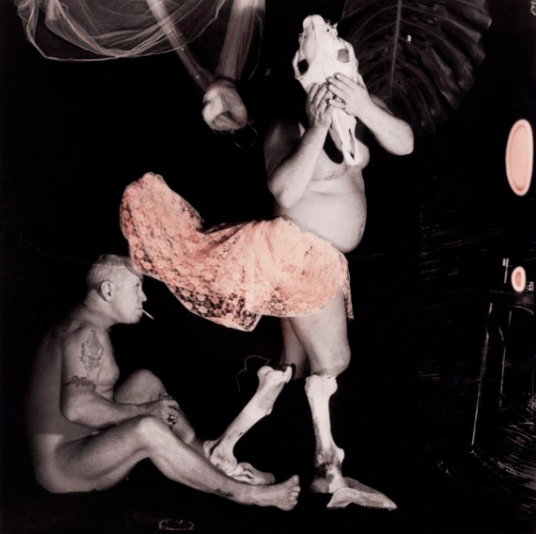 Carmel by the Green is very excited to present Full Disclosure, the first ever presentation of work in the UK by Australian photographer Dr. Ray Cook. A deeply incisive, honest and idiosyncratic artist, the exhibition consists of a wide-range of his output from his ever-expanding oeuvre. Starting with some of his earliest photography from the late 1980s – the anarchic When my ship comes in, I’ll be waiting at the airport – it also includes his visual rumination on the aftermath of AIDS with “at first I was Afraid, I was Petrified” in 2002, as well as reflection on his changing relationship with the ‘gay-scene’ (and its appropriation by the mainstream) in Not with a bang but a whimper.

‘Subversive’ can be a lazy label for artists who tackle taboo subject-matter – especially when those matters relate to their own lives. While it is certainly a by-product of Cook’s methodology, its intention is more nuanced than initial impressions suggest. His tableaus of death and sexuality are delicately balanced with notes of irony, humour and camaraderie. While artifice and theatre are omnipresent – from phallic props to pink-tinted costumery – high camp is subdued by the palpable humanity of his models, almost all of whom are friends or acquaintances. There is sufficient disconnect between the garish (often hand-made) scenery and the vulnerable demeanour of his subjects for the real and the fantastical to blend; the outcome a potent distillation of the artists own lived experience.

Cook has subsequently noted how photography allows him “to talk about the shifting realities of queer life beyond the expected rhetoric of the press and populist activism”. As these images attest in their assemblage of modes (modern and ancient, silly and serious), he has been able to achieve this in numerous ways. He dissociates the symbolic from the material to reinvest ‘deviant’ sexuality with its inherent humanity, and gently ribs liberalist accounts of the homosexual as victim in his eloquently pragmatic works on the physical and psychic effects of AIDS. He has also taken great pleasure in re-inscribing bawdy homosexuality into antiquity; most evident in his series The History of Love, where he challenges the hold of white, heterosexual, middle-class men over the historical record.