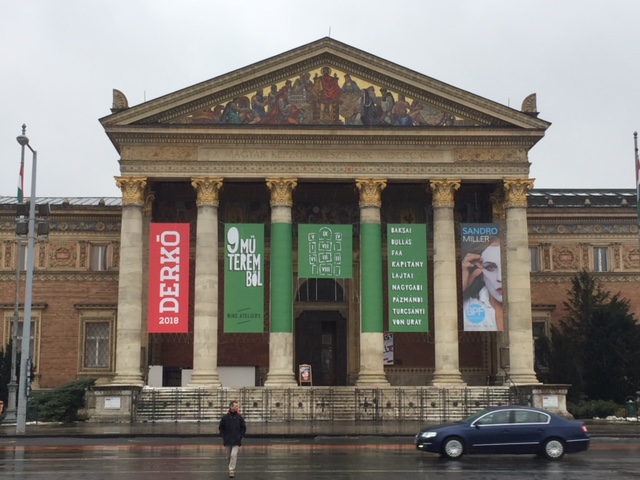 Hungary has a reputation for its high-calibre photography, with a historic cache of celebrated photographers that includes Robert Capa, André Kertész and László Moholy-Nagy, to name only a few. I’m therefore not surprised to see the passion and breadth of Budapest Photo Festival’s 2018 programme, which is packed with contemporary Hungarian photography alongside a wide range of work from international artists, such as Paulo Nozolino, Alain Laboile and David Pujadó.

Taking place from February 28th until April 20th, it encompasses an impressive thirty-eight exhibitions whose creative and thematic depth touch on desire, identity, urban decay, space, temporality and family. The greatest anticipation however is reserved for Sandro Miller’s Malkovich Malkovich Malkovich: Homage to Photographic Masters, arriving in Budapest as part of a world-tour that has encompassed Australia, China, the US and Europe. Sandro’s inclusion in the festival, along with guest attendees like art-house filmmaker Béla Tarr, adds a touch of prestige to an already exciting roster of events.

With only a limited time in Hungary’s capital, I head straight to the Malkovich show at the Műcsarnok Kunsthalle. The importance of this artistic collaboration is shown in the way images from the exhibition permeate the city’s social space: the BPF logo adorning bus stops alongside twin John Malkovichs, and, as I make my way down Andrássy út, he watches over me in the guise of a made-up Meryl Streep. 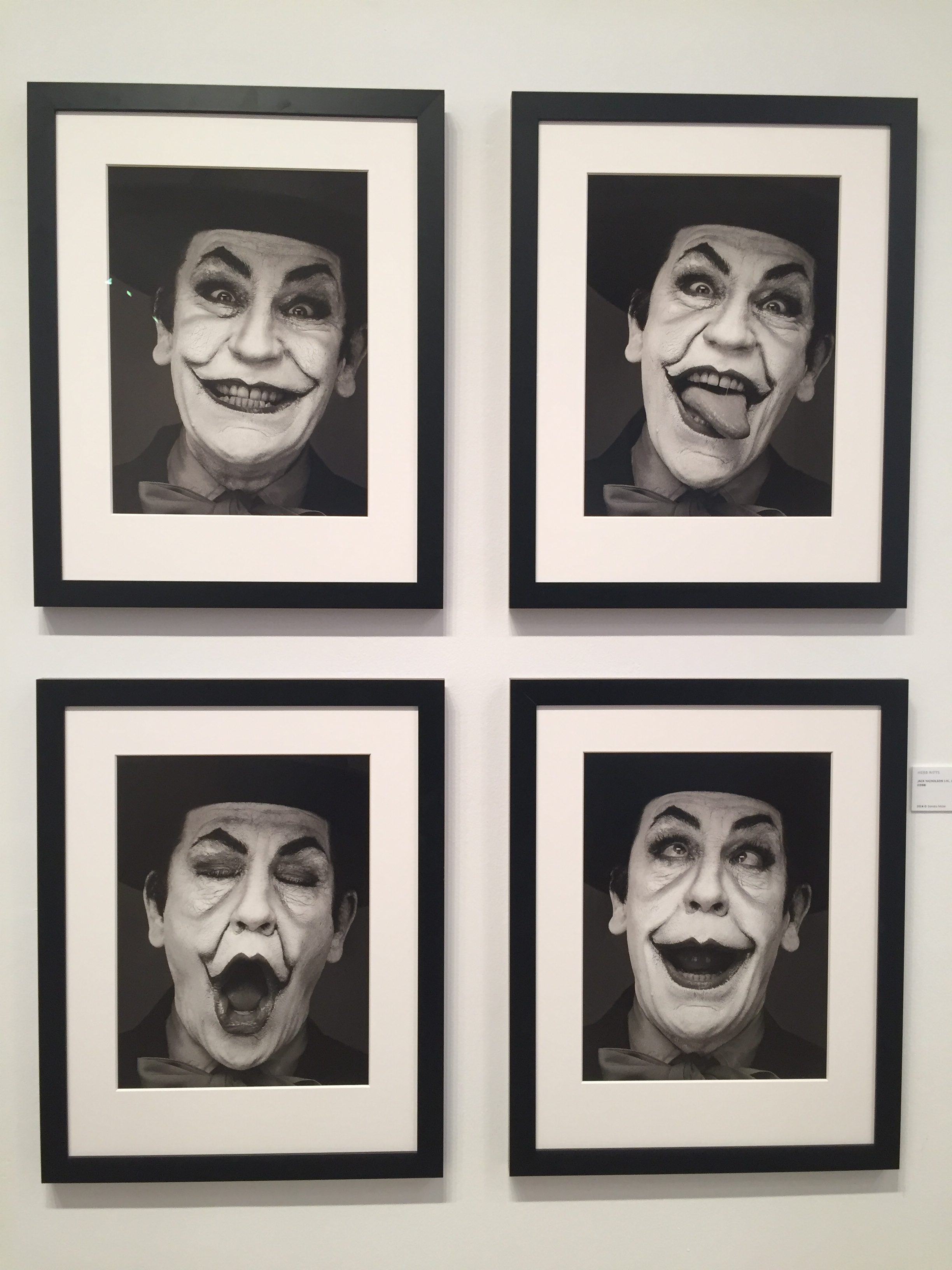 Malkovich Malkovich Malkovich: Homage to Photographic Masters is a visually impressive show, tangibly evinced by the recreation of so many iconic images in one space. A collection of technically-precise facsimiles rather than perfect imitations, these are faithful recreations resulting from the detailed research of a pool of talented artists. What might otherwise be a disparate agglomeration is unified by the show’s shared protagonist: John Malkovich, weaving himself like a mischievous time-traveller into one-hundred-and-thirty years of visual history.

Malkovich achieves various levels of self-effacement here. He makes an incredibly convincing Andy Warhol, Albert Einstein and Igor Stravinsky for example. He is also believably transformed into a young boy through costume, facial expression and a clever rendering of perspective, in Diane Arbus’s Child with a Toy Hand Grenade in Central Park, N.Y.C. Understandably he is less successful at embodying the physicality of famous blonde-bombshell Marilyn Monroe or African-American Muhammad Ali, though he still manages to emote something of their persona in these shots. His features wax and wane from photo-to-photo in a postmodern game of “peek-a-boo” – sometimes genuinely merging with and sometimes visible within the image.

Sandro has sincerely stated there is no intention of poking fun in his works, only of “an honest attempt to make these things as perfect as possible”. However, there is an inescapable amusement to be had in seeing the well-known actor perform the “roles” of a variety of well-known personages. Malkovich channels something of the naughty schoolboy in his appropriation of these often revered cultural icons, while the show’s modus operandi sometimes undermines the authority of the original image, and intentionally or not, draws attention to its constructed nature. Perhaps this is why the Herb Ritts re-creation of Jack-Nicholson’s Joker is to my mind one of the more perfect pieces: not only a visually arresting replica, but lacking the occasional disparity between the original’s content and its appropriation, with both Nicholson’s 1988 shots and Malkovich’s chameleonic work with Sandro channelling the same sense of performativity and irreverence.

A by-product of the project’s play with image is how it flattens the contextual depth of the more social realist works; unmooring them from their specific historical moment and neutralising their mobilising potency. This is particularly pronounced with the implicit indictment of racism in Gordon Park’s American Gothic, Washington, D.C, where “re-casting” with a white man has been acknowledged as contentious by Sandro, and arguably with Dorethea Lange’s image Migrant Mother. In foregrounding performance over politics, Malkovich Malkovich Malkovich sometimes unwittingly obscures lived socio-historic realities. 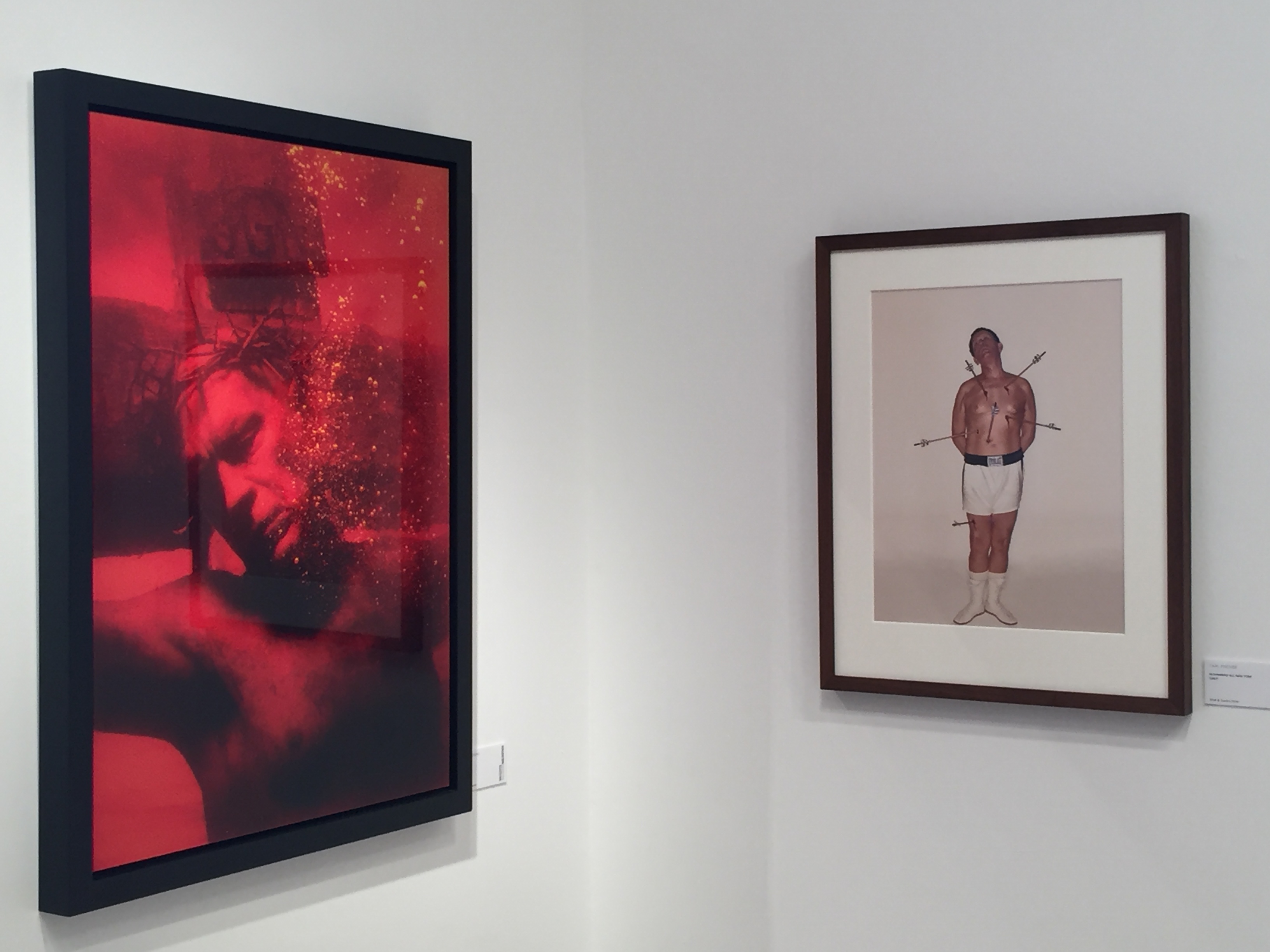 However, acknowledging that this postmodern approach can be problematic doesn’t detract from Sandro’s honourable intention to pay homage to such a rich visual heritage. An entertaining blockbuster of a show, its visibility allows it to connect historic works with a new audience and to sustain the legacies of myriad influential artists. In the end, Malkovich Malkovich Malkovich is an imaginative, amusing, technically assured exhibition that, beneath the fun and games, also provides testament to the empathic ability of great actors and photographers, both able to elucidate a common humanity.

Given this is my first time in Budapest I can’t forfeit the opportunity to do some sight-seeing, but I am resolved to see at least one more exhibition. I decide on the enigmatic black and white works of Invisible Cities, located downtown at the festival’s epicentre. Before heading there I attempt some Hungarian while grabbing a face-full of delicious, chocolate-filled pastries, and coffee in hand wander through the drizzly streets. I get some amazing birds-eye views of the capital from atop St Stephen’s Basilica, all the tourist-baiting attractions laid out ahead of me – the Royal Palace, the Liberty Monument on Gellért Hill – and spy the Danube majestically winding through the city. 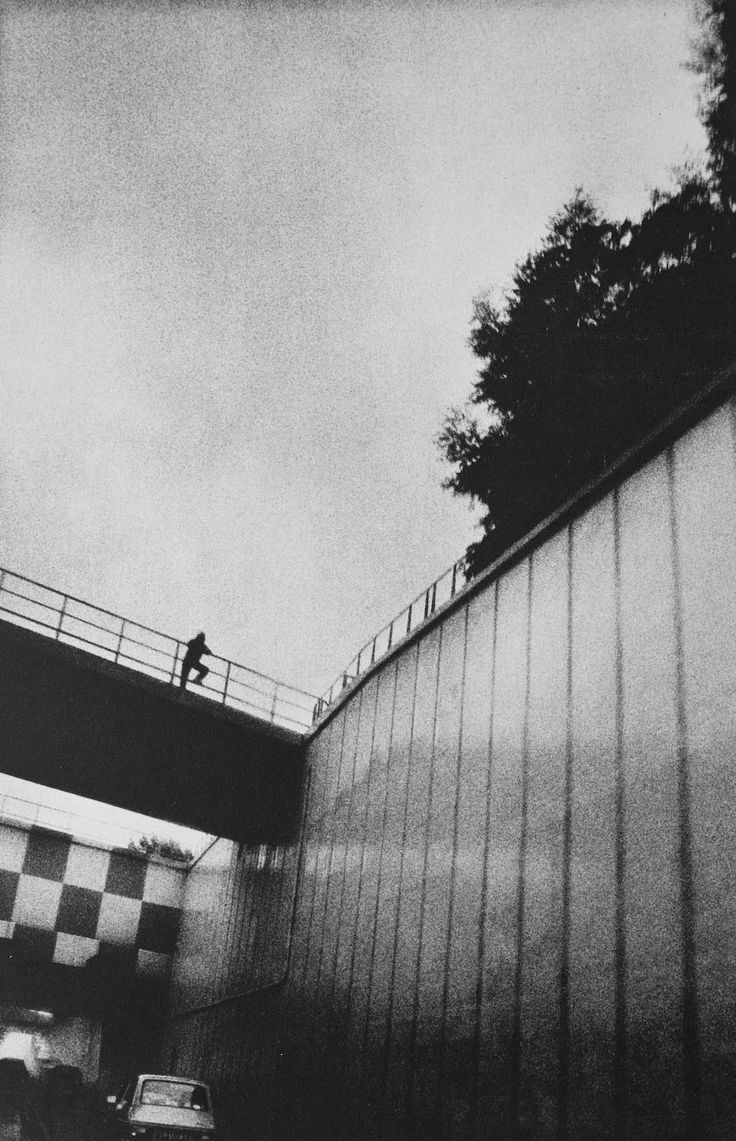 I arrive soon after at Budapest Project Gallery. Invisible Cities, representing the tradition of contemporary Portuguese photography, centres on the work of Paulo Nozolino and José Manuel Rodrigues; their monochrome images striking against the plain white walls, encompassing both sombre symbolism and poetic beauty. It is a productive partnership, with the artists expressing similar concerns (man’s relationship with his environment) but utilising different moods to explore themes of change and transience.

Paulo Nozolino’s imaging of urban existence draws you in with its minimalism; a grainy aesthetic of monochrome, high-contrast, A5-size shots. Obscuring specifics, people become featureless shadows. Buildings merge into darkness and skies glower forebodingly. There is an emphasis on the ebb and flow of life’s essential elements, with the introductory shot evoking the cosmic as lights curve around black space.

Aesthetically a battle is being waged between light and dark. Bright lines rupture the image in Bruxelles (1981), while in another the lit windows of a looming high-rise puncture the gloom. Narbonne (1986) seemingly shows a father and son in silhouette, watching a plane from across the sky. The details are few but their assemblage is compelling – the distillation of a drama, the diminutively sized image evoking childhood nostalgia and a yearning for the past, even though the image carries the threat of war.

Nozolino’s work also potently effuses alienation and decay, with human figures shown in isolation and often obscured against their landscapes, as indistinct as the crumbling buildings that linger in semi-darkness. Las Vegas (1978) subverts the city’s conventional depiction as one of flashing neon and high-stakes drama, showing it instead as a drab, post-apocalyptic wasteland whose lights are barely discernable on the horizon.

Prefiguring today’s abundance of solipsistic devices, El Paso (1978) presents a deceptively simple image of a TV in a mostly featureless room. The image on the screen however shows a man behind bars, echoing the sparse room and dark window in which the picture was taken. Nozolino, commenting on our modern obsession with technology in 2015, noted how “many people are lost in their gadgets, success and money, but they are distractions in regard to what really matters… We are only passing through, we should never forget that.” Not only do his words further highlight society’s increasing atomisation, but he elucidates the importance of recognising our ephemeral existence. 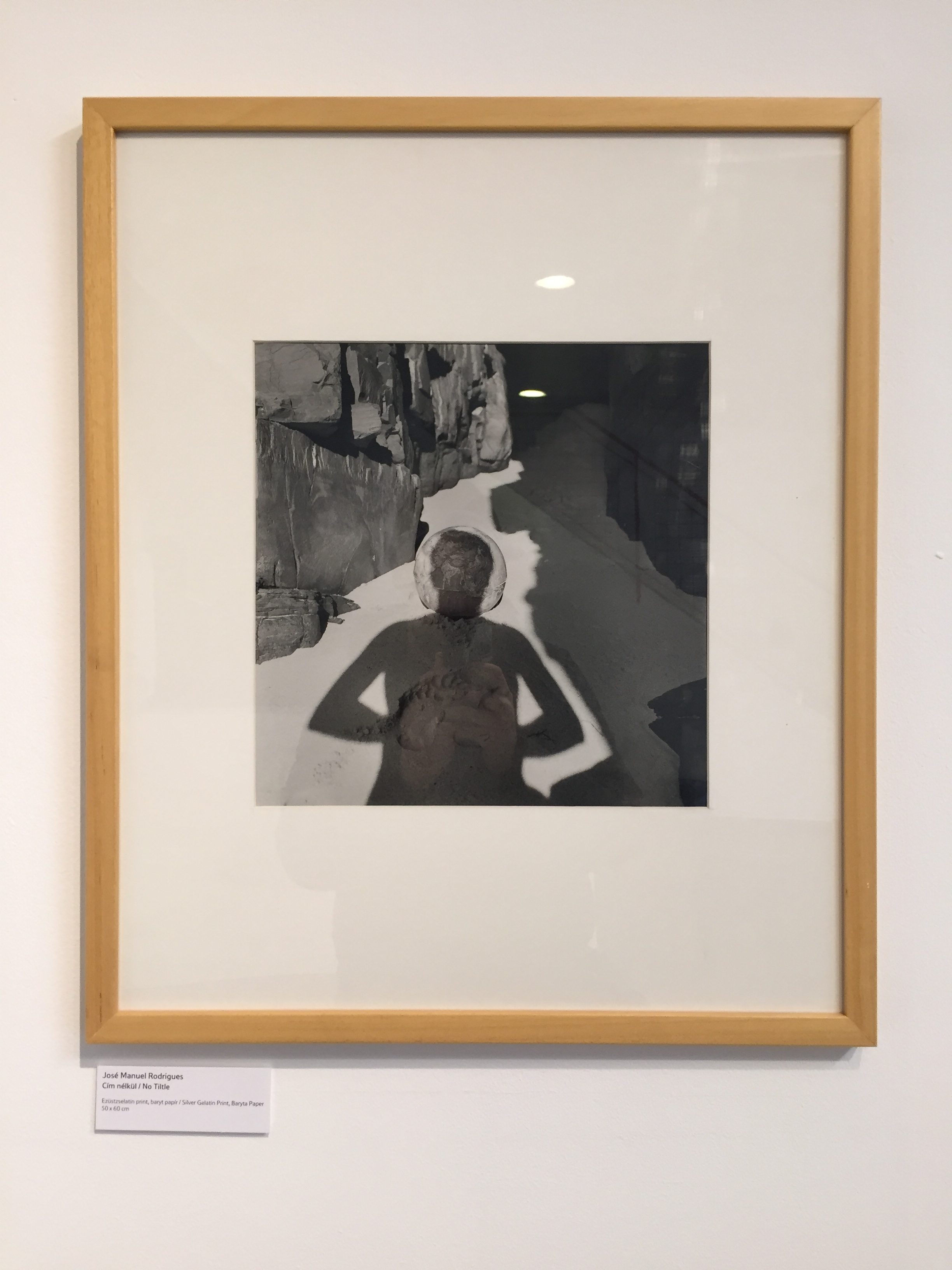 José Manuel Rodrigues’s photography addresses similar motifs but presents a more positive interpretation of change, lacking the pessimistic taint of Nozolino’s work. His use of expressive symbolism posits a continuity between humans and their environment, as we see in various images of women reclining in or near water. The subjects’ heads peek out from the corner of the photo, juxtaposed against large bodies of water in a sort of physical and mental merging. Not only does this suggest the elemental in us, a symbiotic connection between internal and external worlds, but it proposes a more reciprocal and less anthropocentric relationship with our environment.

Decay and transience are also depicted, but sidestep any sense of fatality. The monochrome images, bright and crisp, show these processes as integral to life, expressing an almost anthropological understanding of them. One untitled work conveys a kind of symmetry by mirroring a gridded window on the right, its inverse image on the left showing the shadow of the photographer taking the picture – evoking both creation and impermanence. This sense of ‘yin and yang’ harmony is depicted throughout Rodrigues’s photography, expressing the interdependence of light and dark, life and death.

On the second floor of the gallery is a selection of his larger, landscape-focused works. Swampy rock pools and bodies of water – the only colour images of the show – suggest an almost timeless, primordial quality. One photo in particular can be interpreted as a hierarchy of creation: the bottom stratum of the frame formless shadow, the next mineral matter, then rising up into a man-made conical form. Quietly enigmatic, these images focus on the general and elemental in a bid to elucidate the nature of being, existence, and our part in an interconnected universe.

Before departing for the airport and leaving this fascinating, multi-faceted city behind, I have a brief moment to visit the opening of David Pujadó’s Biedma – Poems: from ink to light at the Instituto Cervantes de Budapest (showing until May 16th). His works are quiet, contemplative expressions of the poems of Jaime Gil de Biedma, with Pujadó’s minimalist aesthetic the result of him wanting to “say many things in very few words”. It is an affecting union of words and images. But unfortunately I soon have to say “viszontlátásra” to Budapest, to its delicious food and thriving photographic scene, leaving BPF 2018 to its on-going successes, at least for another year.

Daniel studied Humanities and Media at Birkbeck University, with an emphasis on visual culture and spectatorship, and is currently completing his MA in Contemporary Literature and Culture. A keen writer from an early age, he currently produces articles for London Photography Diary, Photomonitor, and a number of other online publications, as well as maintaining a blog of personal creative work entitled The End of Fiction; a mixture of poetry, prose and film.