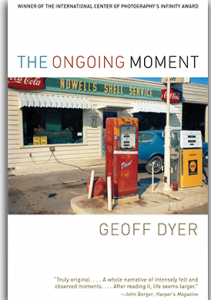 To quote the famous dictum: writing about music is like dancing about architecture. With that said, I would gladly watch someone dance about architecture, if the opportunity ever came along. While I have yet to read Geoff Dyer’s book But Beautiful: A Book About Jazz (1991), in which he writes about music (or dances about architecture – I honestly haven’t read it), his writings about photography in The Ongoing Moment (2005) are often as innovate and freshly conceived as I imagine a foxtrot about Brutalism might be.

No one ever argued that dancing and architecture are opposed, after all, and Dyer is quick to make clear that writing about photography is not an irrelevant or unproductive venture. Painting a backdrop connection between writing and photography, Dyer cites Walker Evan’s musing that writers like James Joyce and Henry James were “unconscious photographers,” ceaselessly describing and categorizing the infinite variety of the world in haphazard order. But while the concerns of photography are as encompassing as the human condition, Dyer – who is not a photographer, and claims not even to own a camera – does admit that there’s a distinction between the “idea of photography” (he borrows the term from Stieglitz), and photography in practice. Even his title, The Ongoing Moment, is a reinterpretation of photographer Henri Cartier-Bresson’s phrase, “the decisive moment.” While photography attempts to pin down the ephemeral to speak to the essence of a moment, Dyer’s writing loosens these same silent images from the wall and shuffles them into new conversations, reading over them histories and biographies which expand their meanings and sweep them into a current of ever-evolving contemplation. Dyer’s writing rambles, returns, and reconsiders; offering no thesis or history, but a winding narrative of associations.

At times, Dyer’s writing feels like an (albeit delightful) run-on sentence. He drifts between themes grand and specific such as blindness, hands, nudes, hats, benches, beds, and stairs with hardly more than a breath in between. The Ongoing Moment is truly ongoing in the most literal sense of the term, and with no strict divisions or natural breaking points occurring in the text, I was forced ever onward in my reading – tumbling unwittingly into the next section before I had even realized I’d arrived. In such a flurry of thought, the distinctions between images seem at once obvious and negligible. (For example, here is the quote which serves to bridge the transition between the themes of “blindness” and “hands,” paraphrased from a private eye: “The things you notice in broad daylight – colours, hair, clothes – can all be changed quickly and easily. But the things you are obliged to concentrate on at night… never change. They are as permanent and personal as the lines of your hand.”) I often found myself having to flip back several pages to discover how I had gotten to what I was reading, or flip forward in the text to see when I might be afforded a change to pause and reflect upon what was being presented. Needless to say, I rarely found either direction completely satisfying.

But Dyer’s stylistic choices and transgressions are justified by their accordance with the larger, philosophical musings he is attempting to make about the nature of understanding the world. Dyer often ruminates about taxonomies and attempts to order the world, an impulse which he feels is inherent to both photography and writing, but he is also fascinated by the arbitrary divisions of many lists, and particularly about photography’s intrinsic tendency to bleed through many traditional categorizations. Further freeing him from of owning responsibly for his informal arguments or owing the reader any sort of comprehensive account of the history of photography, Dyer is also quick to adopt the role of humble dilatant. “The person doing the learning is the person writing the book as much as the person reading it,” he writes in his introduction, adding that that his focus throughout is partial – both in the sense that it leaves out many important photographers, and that it is driven primarily by his own personal interests.

Instead of stiff academic writing, The Ongoing Moment presents dreamlike, capricious connections between seemingly unrelated works that would likely have remained overlooked by those with both feet stuck in the traditional mires of art history. The result is liberating, and reaches past individual photographs toward an enchanted philosophy of sight. In one memorable passage, Dyer takes us on a nearly fairytale-like journey as we walk first with Walker Evans and then Lee Friedlander as they photograph individual numbers and letters on signs and advertisements, attempting to isolate, itemize, and decontextualize the symbols into what Dyer describes as a “a vast anagram of the city,” emerging into a “bacteriological rather than the literary sense of the world.” The description is beautiful, narrative, and imaginative, and could just as easily be applied to Dyer’s own artistic pursuits. The richness of language one might expect from an accomplished writer combines in The Ongoing Moment with a meditative dissolution of the established of literature and art, and the result is a new, living order which sprouts from overlooked corners and lays out its own network of roots.

There is no definitive conclusion to Dyer’s book, just as there is no closure to any of his arguments, which instead reoccur and transform throughout like the theme of a fugue. Reaching the ending paragraphs, I was left with the impression that the book might be as successfully read backwards, or outwards from the middle, or even in an infinite loop without repeating the same experience. Dyer’s conversations continually build and collapse upon one another, and the end result therefore is at once exhilarating or exhausting, fine-turned or flawed – but always essentially, decisively ongoing.