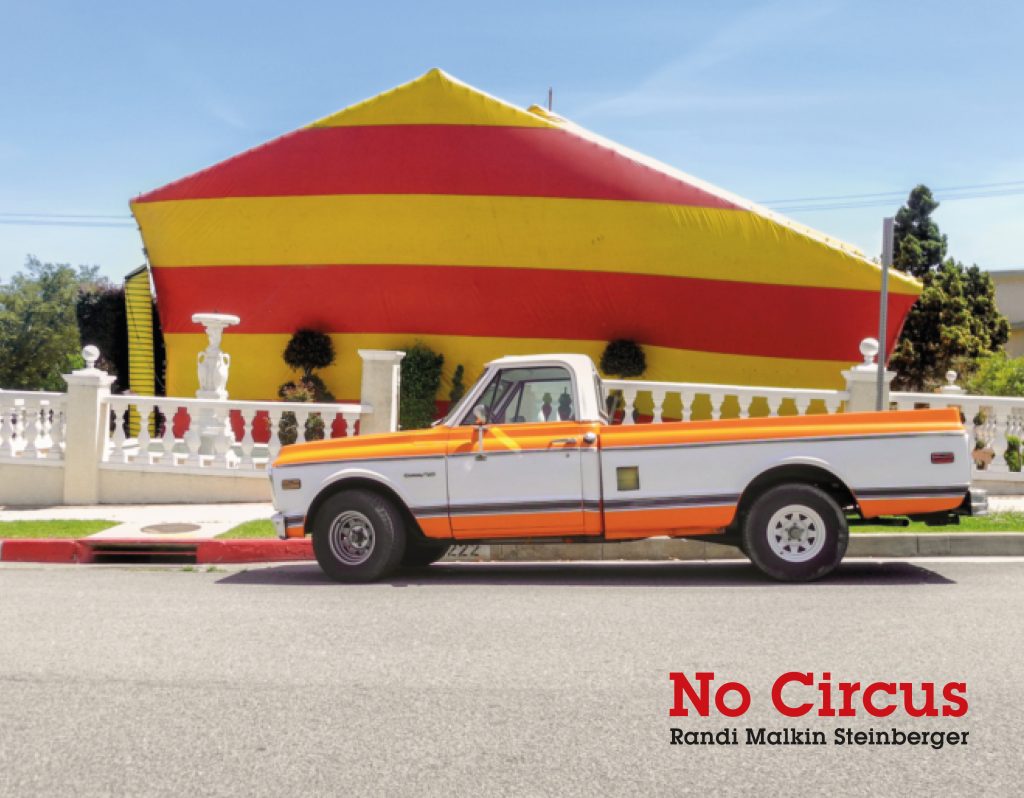 One of my favorite things to do as a passenger in a car is to lean my head out of the window and gaze out at the houses as I pass them by, dreaming about the worlds and lives which must exist within each. Surely there are stargazers in that house with the porch; a lonely child inside the house with the chipped paint. Every house seems to possess its own cosmos; its own palette for a life which I, as a passing stranger, am free to imagine. Having lived my entire life in the relatively cool climate of the greater New York area, I can’t recall ever having ever passed by a house wrapped up in a brightly-striped tarp for fumigation, as happens more frequently in warm climates which allow termites to swarm. Luckily, Randi Malkin Steinberger’s forthcoming photobook, No Circus, turns its gaze on the tented curiosities she found while driving around Los Angeles, and provides not only an excellent roadside survey, but a chance for the viewer to step out of the car, wander around, and begin their own imaginings.

In many ways, No Circus, comprised of nearly 70 photographs houses undergoing fumigation, seems almost too easy of a photographic project. The circus comparison is obvious, and there’s an easy absurdity to the tents, which is as unmissable a spectacle as a showgirl riding an elephant down the middle of Main Street. The bright carnival pinstripes beg to be photographed, and the tents’ alluring contrast to the familiar suburban settings and L.A. landscaping which they have been pitched against is a quality I would argue most photographers would gravitate toward. The houses, cartoonized into bizarre geometric forms, seem almost too opportunistically bloated and out of proportion to the dull normalcy of the rest of the neighborhood to pass by. I imagine that for the residents of L.A., the appearance and disappearance of the tents on quiet suburban streets must especially carry with it the same exotic mystery of a travelling circus; the tents materializing overnight and then vanishing again without warning, as though called away by some invisible director, his sights already set on the next town. Of course, lingering in the background and adding in interest to the strange disjuncture of normalcy is also the knowledge that these tents belong to a league of structures which have been abandoned and temporarily pulled from their daily roles to be pumped full of poison and are – as Malkin Steinberger’s title reminds us – no circus.

But the true mark of a successful photographer is not the ability to see what everyone else can see, but to pursue that thought past the individual house in question and down to the end of the street, and to the next, until the streetlights come on and living-room windows glow purple from the glow of the TV. With every turn of the page, Malkin Steinberger’s obsessive tent studies feel like the repetition of the same word over and over again until it loses all of its context and seems to stew solely in its own nonsensical existence. Although not all of her images are remarkable individually, the power of No Circus lies in the obsessive pursuit of a single idea; in finding and multiplying the strange until it populates the entire world. 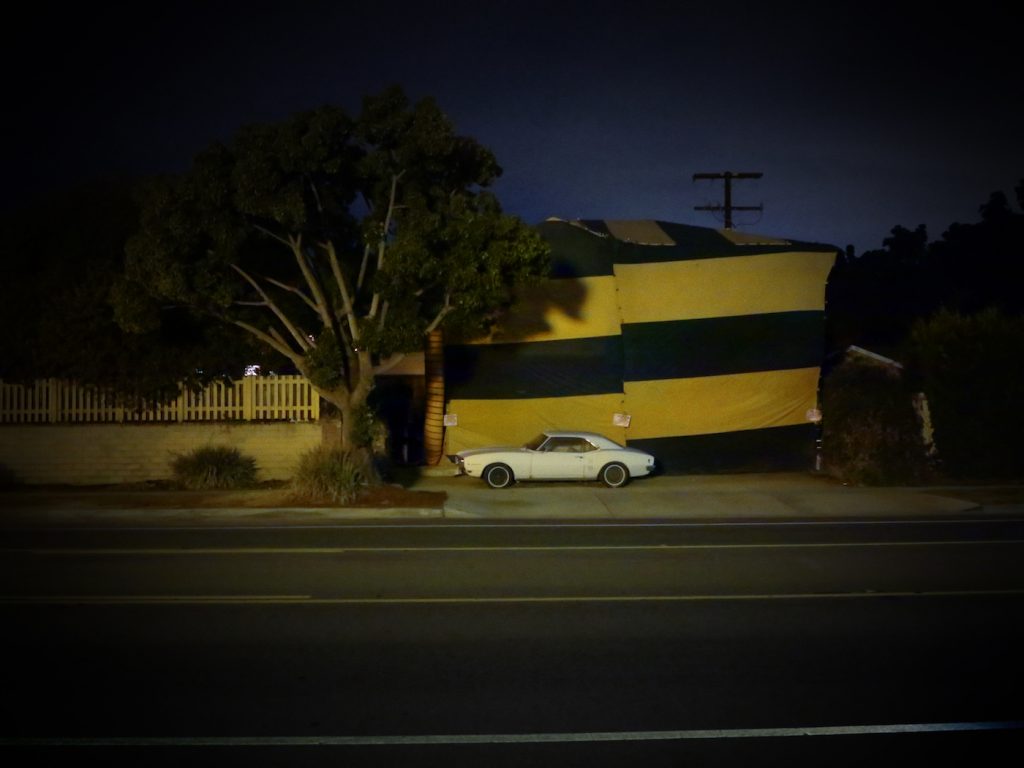 Perhaps because I am a writer myself, what I found to be the most communicative element of No Circus, however, was D.J. Waldie’s beautiful and poetic introductory essay, which snaps the images together thematically and then expands them into a thousand directions. Oscillating between tender personal narrative and an informative overview of fumigation and its many associated dangers, Waldie’s essay sets a dark and contemplative tone over the entire project, occasionally pulling on heartstrings and letting them resonate all the way back to childhood. After a discussion of sulfuryl floride and chloropicrin, the poison gases used to break down termite’s bodies, a short blank stretch of a paragraph break leads us to his own boyhood. He’s playing hide-and-go-seek with his brother, and finding himself standing alone in his bedroom. “Because I’m small, the room seems large. And I’m afraid. My knees actually begin to knock out of fear. I’m afraid of what isn’t in the room. I fear my own absence.”

A house is more than its structure, he explains, and has a life beyond those who live there – its essence is composed of the anxieties inside; all of its absurdities, and associations. “Houses haunt themselves,” he writes. “While we’re away, the chair improvises a sitter, the door frame a passing ﬁgure, and the bed a sleeper…. As the key is set in the door lock by new owners for the ﬁrst time, as the door knob is turned, as the door sweeps inward, the house constructs a whole life.”

With Waldie’s words in mind, I returned to the photographs. There, hiding behind the easy punchline I first found in No Circus, I uncovered a subtler, more haunted infestation of an idea. Coupled with Waldie’s concerned sense of “home” and disturbed overview of the invasive danger of fumigation, I felt a real sense of anxiety began to permeate a few of Malkin Steinberger’s images, which come in a little too close to the ugly reality of the tubing and stitching of the tents to allow them to maintain any cheerful world. Although many of her photographs seem to delight in the bright and the absurd, others seem to examine the houses with the same scientific caution one might bring to examining brightly-colored poisonous dart frog. A few photographs are taken from behind shrubbery, or through the links of a fence. A photograph labelled Montana Ave. is dark and blurred, having been taken at night from the other side of the road. We focus on a white car parked in front, as though watching out for who might be nearby. Malkin Steinberger peeps through rips and flaps, and stops here and there to examine the red warning signs reading “Caution! Peligro!” and reminding us of all of the dangers which threaten these poisoned houses: suffocation, gas explosions, burglary. Such houses have not turned into our childhood dreams, but into our adult nightmares. Like weeping clowns, these images unsettle in their contradictions.

But standing alone, Malkin Steinberger offers a weak thesis. Her images display less of the direct statements or moments of introspection found in Waldie’s writing than a general magnetism to contrasts – the contrast of the shape of the tent to the shape of shrubbery in front of it; the bright colors of tarp to the natural colors of nearby flowers; the apparent excitement of the tent to the opposing monochrome of the rest of the street. Perhaps a tighter edit of images might have offered a less diluted narrative, but where Waldie leads, Malkin Steinberger only wanders. 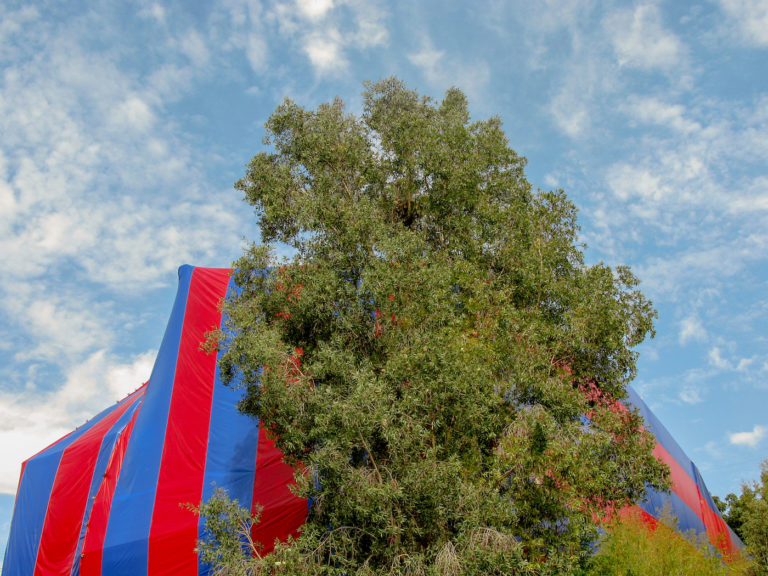 Still, there’s something delightful about No Circus which doesn’t suffer from the lack of heavy intent found in Waldie’s essay. Isn’t that the point of dreaming, anyway? Not to offer a plot or a moral, but to notice the elements which make up a world and wonder how else they might appear. Whereas Waldie worries, Malkin Steinberger imagines. Her images, which linger as long by flowers as they do by caution tape, seem to dream life into these abandoned structures, engaging with sights that catch her attention, rather than illustrate a point.  “To be something more a windbreak or a covering from rain or a frail barrier, a home must have dreams inside. A house undreamed in is already neglected,” Waldie writes, and Malkin Steinberger answers with a blue tarp cutting across with sky; with a ring of silver tent clips left in the dust like a performer’s forgotten crown, or a memento from a dream.

At once material and imagined, fantastic and ordinary, Malkin Steinberger’s No Circus opens the door to a world which is absurd in its anxiety, delightful in its dissolution, and, perhaps, already just next door.

No Circus will be published by Damiani Books on September 27, 2016.

Sasha Patkin is a writer, photographer, and contributing editor to The New York Diaries. More of her writing and work can be found at www.sashapatkin.com.