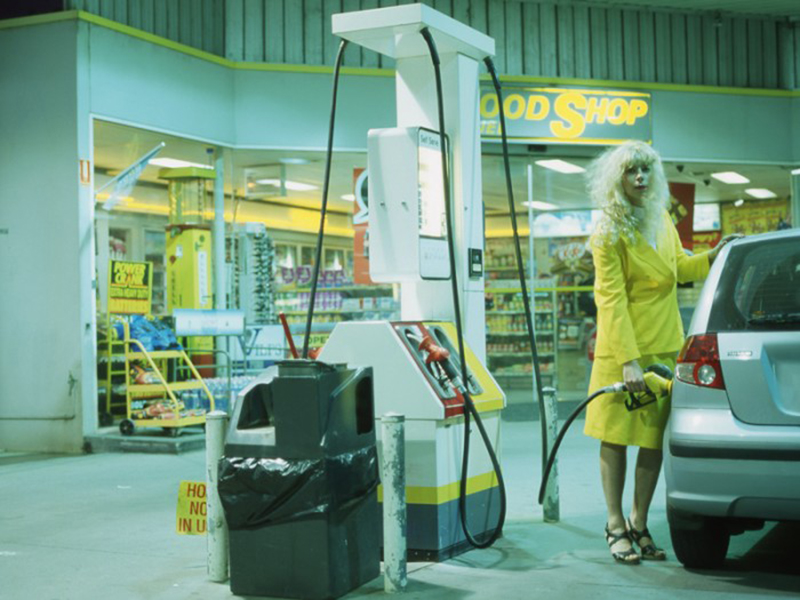 “We act as if that being of a man or that being of a woman is actually an internal reality or something that is simply true about us, a fact about us, but actually it’s a phenomenon that is being produced all the time.” Judith Butler

“I don’t know where the artificial stops and the real starts.” Andy Warhol

Musing on the theme of gender performance, the exhibiting artists have sought to undress, metaphorically and literally, the subjects of their lens. Each seeks to extricate them from the paraphernalia of prescriptive gender identities; to open up a space for individual self-expression and to elucidate the performative nature of masculinity and femininity. As Judith Butler has famously stated, “to say gender is performative is to say that nobody really is a gender from the start.” Butler’s words illustrate modernity’s ongoing project of unravelling “essentialised” sexual stereotypes and gender norms, emphasising their socio-cultural perpetuation rather than any basis in biology.

The exhibition displays a range of varied but complementary perspectives on gender. Andrew J Burford’s approach diverges from conventional presentations of the non-binary ‘other’ by photographing his subject in banal, domestic environments, whilst simultaneously challenging masculine and feminine categories through ironic juxtaposition. Lucy Le Brocq’s black and white shots of drag king Calvin Decline, similarly illustrating gender as performative, also suggest the discovery of a more ‘authentic’ self through gender play and an identity outside the confines of a male/female polarity. Finally, Jess Goodridge’s assemblage of experimental shots and portraiture explore the slippage between biology and culture, highlighting genders’ socially constructed basis; showing how the symbolism of femininity and by extension masculinity are arbitrarily projected onto the blank canvases of human bodies.

I am She: I am He is London Photography Diary’s 6th and final show, curated by Brigid Cara Reid and Ellie Hemsley.  In concluding the year-long programme, we would like to thank our exhibition partner Carmel by the Green for their encouragement and collaboration throughout this exciting undertaking. Also invaluable to its success has been Exhibition Manager Ivanna D’Accio’s unwavering curatorial support and enthusiasm. Finally, a thank you to The Photography Diaries’ publisher, Ashley Lumb, without whose guidance and perseverance this programme of shows would not have been possible.

Andrew J Burford (based in Australia) is a queer artist raised in South Africa. He completed his degree in Creative Advertising at the University of West London in 2008, before moving to Australia to develop his artistic career. Burford received the Kodak Professional Excellence in Photomedia Award in 2011, and was also recipient of the Josephine Ulrick and Win Schubert Photography Award the following year. Burford has spoken and exhibited work internationally; in the USA, Australia, Germany and the United Kingdom. He also has work held in private collections across Australia.

Burford uses his practice to seek an understanding of the fractured situations and modes of being within culture relating to masculinity, investigating the gap between a conventional masculine male and ‘the other’ and the supporting traits associated with both. It is an exploration of these divergent masculinities, through performance, installation, photography and video, which he pursues by examining socially supported stereotypes and expectations.

His series, Untitled (Taylor), is a photographic look into gender performance and a celebration of the banal. By steering away from the overly camp aesthetic usually employed to portray drag queens, he presents a world where the importance of gender becomes as stale as the tasks undertook by his subjects. 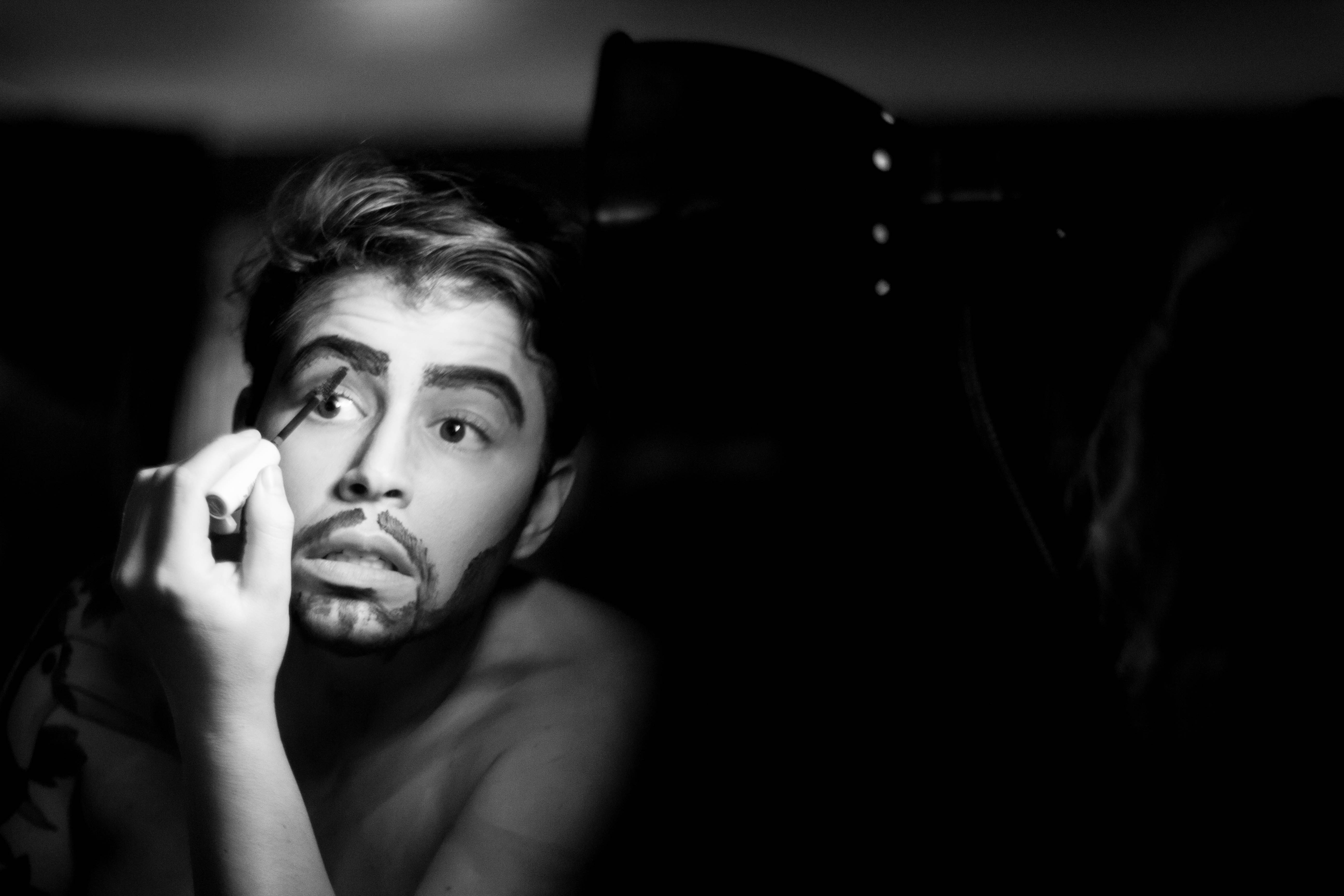 Lucy Le Brocq (based in Brighton, UK) was born in 1986 and left university with an honours degree in Fine Art. Her work explores the complex interaction between the individual, gender and society, with her central photographic mode being documentary. She has been a photographer for over ten years, and uses the medium to explore the ambiguities of lived experience; interrogating where artifice ends and authenticity begins.

Le Brocq’s intimate black and white photographs document her time spent with female drag performers, or ‘drag kings’, depicting their tentative transformations into their on-stage personas. The exhibited photos depict Ari Rice bringing her alter-ego Calvin Decline into being, a representation of toxic white masculinity. These photographs convey Le Brocq’s understanding of gender fluidity; as Ari becomes Calvin, ‘male’ and ‘female’ masks slip and are shown to co-exist. Her work asks the viewer to reconsider the polarised nature of gender; depicting the beauty in the non-binary, and providing us with a glimpse of the person behind the performance.

Jess Goodridge (based in the UK) is a photographer whose work is fiction based and plays with the timeless and semiotic qualities of analogue photography. Through her quiet, melancholic images, her models retain, despite photography’s endlessly reproducible and polysemous nature, a sense of singularity. Goodridge graduates in July 2017 with a first class honours degree in Photography from Nottingham Trent University.

Goodridge’s series of images combine the styles of experimental and portrait photography. Similar to the adjoining works in this exhibition, her images are self-reflexive. Photography, often seen as providing a true reflection of reality, is depicted as performance; staged and acted out by both the photographer and the subject, seen in the use of props as well as composition and lighting.

Her images elicit a journey of self-discovery; a space where it is possible to discover one’s own unique identity in a world comprised of binaries. The visual language of these photos reference life and death, as well as stereotypical markers of femininity, such as fruit and flowers. In conflating the two, she draws parallels between the transitory nature of life with the similarly shifting paradigm of gender identity.